Last week was a busy one, on Monday I visited my friend who inspired me to get onto this one year project, I refer to her in my first post “Its time” Well, since I lasts visited her she has not touched the room we started on..all good intention and all that ..but I get it, Ive been the same for years with Whats lurking behind that door so after 2 hours of chatting and tea we ventured in again to her beautiful room or what could be beautiful once the plaster & skirting are  back on the walls and the room is painted etc  but looking at all the stuff..piled up in boxes, I felt I was in control of the situation, we didn’t ponder on items we swiftly either put on the” to keep” pile, in a bin bag or into the charity bag.  Soon a space was appearing, floorboards could be seen as boxes were emptied and records piled up into new boxes and collated together to be kept..lots of records and DVDS bringing back memories of watching films with her girls which I can totally relate to..its Winnie the Poohs most Amazing Adventure that bring on that nostalgic feeling inside for me and my head fills up with the disney music..Oh I remember sitting with Beth and Mae before they were school age under a blanket..its never had the same effect on Charlie he was into Thomas the Tank until he started school and then he was too cool for Thomas as Ben bloody Ten got introduced into his life..hey ho..

Anyway back to my friends stuff, about 5 black bags went into the bin filled with papers with her daughters drawing on and writings she was finally happy to throw away as we had created a little collection of ones not so creased or tatty to put on the keep pile, old children’s clothes past the state of being able to be handed down to anyone, broken toys etc and then about 5 black bags for the charity which I suggested we drive to and drop off straight away, being only too aware of intended bags for charity cluttering up an area, be it the porch, car, under stairs cupboard etc, so that’s what we did it was was very satisfying..

On our return I was telling her how she had inspired me to start sorting through my own mammoth pile of clutter that was Lurking behind that door I told her I was going through it and piling it all into the room behind the kitchen that was also housing clutter so I could concentrate on just one room at a time with the intention of the 2 rooms being decorated and usable.  She told me it wasn’t just this beautiful room that she needed to declutter she also had a cellar garage and attic all in the same state…Wow I now feel like I want to pick the lot up and chuck it in her cellar so she can concentrate on making this one room lovely rather than painstakingly going through little bits of paper with a child’s drawing on…her decluttering is going to take a longer time than mine Im thinking..I did tell her I was writing this blog too, haha I wander if she will ever read it? 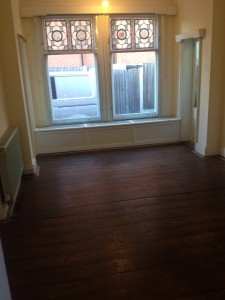 have played in a charity tennis tournament, had a lovely night with my girlfriends with prosecco cocktails & karaoke and an evening saying goodbye to 2 of my daughters best friends off to Uni so not much time for my own decluttering but i did achieve something that has put the icing on the cake for me…yesterday afternoon I ventured into my husband workshop found a stanley knife and cut up the carpet that was Lurking behind that door rolled it up and threw it onto his trailer to go off to the tip..How Fabulous.. I immediately put the image of the empty room up on my B&B Facebook page www.facebook/ferndellshrewsbury  and quite simply ..No! I don’t have the guts to put the before image up on this blog..well not yet anyway..