This weekend was the anniversary of my lovely mum passing away, 4 years, blimey its rocketed by, but I like to remember it with a big smile as she was so full of life and left us with so many happy memories. The room lukring behind that door was for a few weeks her bedroom..all my “clutter” was simply squeezed to one end of the room piled up high hidden under 4 curtains which used to hang in the twin room (remember I run a B&B).

The Macmillan nurses arranged for a hospital bed to be delivered along with a zimmer frame & a commode, my poor mum was so embarrassed when the commode needed emptying but my brother would make her laugh by saying with a chuckle “its alright, its just like camping”.  My mum went into the local hospice which was a fantastic support to us it was the time of year when the conkers were around and my little Charlie who was 4, on his first visit collected loads in her bedpan, over the following few days we would take a 4pt milk bottle with the top cut off to collect them in, a year later we scattered her ashes under that conker tree.

Any way the room lurking behind that door I’m proud to say is empty and I was simply reminiscing about the use the room has had as I was attempting to pull up the carpet gripper around the edge of the room, which isn’t as easy as I thought it would be, nor is trying to dismantle/smash the brick fire surround, think I might have to accept defeat and ask the man who said he would do it in the first place…my husband.

I thought a picture of some conkers would be nice for this blog post, so I’ve just taken the dog for a walk down to the river opposite the house, as there is a big conker tree by the bridge but they must have come earlier this year as there wasn’t a single one to see..hey ho

So a picture of my abandoned tools will have to suffice 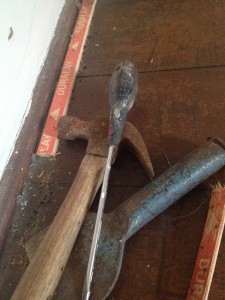