Today’s task I set myself while peering at what was lurking behind that door, was to move 2 large items, a dining table and a small wardrobe and put into the room behind the kitchen.

This was achieved quite swiftly to be fair, since I had made room for them the other week 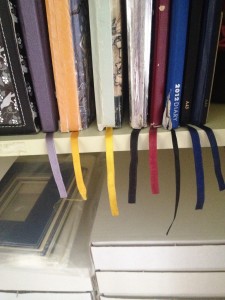 (please see my “getting started” post if you’ve not read it and want the emotional details).. anyhow, with the cute wardrobe in place it was a shame not to take advantage and put some stuff into it…so I chose office type things… my boxes with those important paper things in, like passports, car/house insurance, MOT, birth certificates you know the type. I found myself not just shoving them in but arranging them so they looked pleasing when I opened the door. What I was most pleased with was finding all 8years of my B&B diaries from 2007 I particularly like it how the little ribbons flopped over the shelf..I so need to get a life I know, but just had to photograph them for the blog.

I knew it wasn’t just me that had these areas of clutter, comments on my FB page have confirmed that, one said “I have a room like that-its one of the nicest rooms in the cottage but being the biggest it was the natural dumping room”.  Hopefully I will inspire others to “tackle their messy areas” as another suggested.

As you may or may not know I run a Bed and Breakfast in Shrewsbury its called Ferndell B&B and it has its own Facebook page and Twitter account @fern_dell I mentioned Id started this 12 month blog and one Shropshire Mon & others did  comment they wanted to see the room but I replied with “no chance”..but who knows? as the months progress and the room starts to take shape then maybe, I might share the “before” photos  in my phone of the room luking behind that door . One photo I will share with you later, is something lovely in the far corner up on its end but that will be in a future post. ..plus there’s no room in the room behind the kitchen “yet” to put the lovely thing.