The room behind that door has been left open for the past couple of weeks as we have had the decorator in, doing the Hall Stairs and landing. Now this time last year there would have been no way I would have let him see what was lurking behind that door, but it was so handy for him to have his tools left in there each night so the area was clear for our guests going up and down stairs, remember we run a B&B called Ferndell do click on the link I promise not a scrap of clutter on show on the website, but also there would have been no room to put his things, due to the amount of clutter in there. 10 months on from the start of this mammoth one year decluttering mission and pots of paints, brushes, rollers, ladders, cloths etc all sat happily in the corner of the room while my husband worked on the new storage unit.. 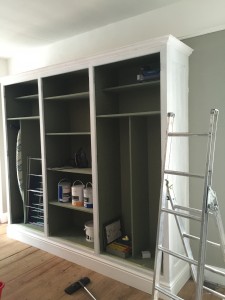 which is now painted and waiting for me to buy nice knobs for the doors which will go on this week…(the white is just the undercoat) so exciting as this means I can then transfer the stuff that is to be kept that’s sitting patiently in the room behind the kitchen.  Sad I know but ‘Ive been practising where the ironing board will sit, even the clothes airers & hoover have their own slot.

One of the many things on my “to do” list is to get a frame for my daughters Mae’s painting of a panda,

which she did in year 2 of junior school, she’s now in year 10 of the big school and Ive finally done it, so when the artwork go’s back up on the walls this week the panda painting will be amongst them, I cant believe its sat folded for 8 years in the room behind that door, I knew it was special when she bought it home from Meole Junior school, but like most things, it just got dumped behind that door as though the room was a huge filing cabinet. I stumbled across it months ago while sorting out one of the many boxes, but why its taken me this long to get a frame I have no idea.

Two items that’s been moved around during this decluttering process, but never made it to the charity shop are our beautiful stair gates we 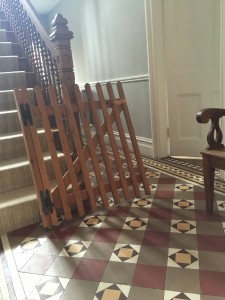 were given when my Charlie was a toddler. Ive always liked the idea of  “pay it forward”  and as these are not your usual ones and I was so happy to see a request on twitter last week by a local child friendly cafe in Shrewsbury called @ingoodhandscafe So I was delighted to pop one of the gates over this week. Im looking forward to visiting again next week and staying for a bite to eat.

With the left over fabric, from the Roman blind I’ve recently had made for the little window 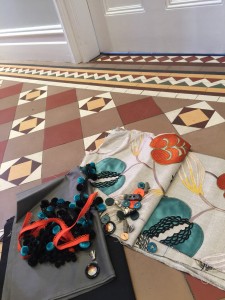 in the room lurking behind that door, I’m going to have cushions made for the window seat.  I’ve been and bought pompoms and buttons to jazz them up a bit..cant wait..just the lampshades to buy and The Lovely thing still to sell but with the storage unit made at least I can then move the Lovely thing  into the room behind the kitchen and then I do believe I will be finished…

OMG possibly a month ahead of schedule. Ok so I wont have TWO new beautiful, useful rooms, decluttered, & decorated after 8 years, but I will have ONE!