I’ve been putting off writing this latest blog post, because I wanted to report back to you I had sold the Lovely thing and show off what is currantly lurking behind that door, but sadly sometimes things don’t go to plan. (if your reading this blog for the first time click here to see what the lovely thing is)

I feel I’m starting to slow down on this journey, 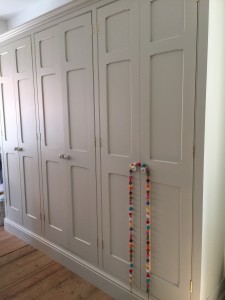 the beautiful storage unit where the fireplace was is now finished, painted with doors hung & fancy knobs on, I have moved some stuff into it, but I still have more to move over and I know in a draw in a carrier bag is a large piece of fabric with a very sentimental tale I will share next time.  I’m waiting to buy a desk to go under the little window to house the admin paper type stuff. Will be great to have the laptop and printer in a place they belong, rather than constantly moving them to the kitchen table from off an upturned chair or the roof of the dogs cage, from out of  the room behind the kitchen.

I have exhausted social media over the last 3 weeks trying to sell the lovely thing using Facebook, Twitter and Instagram and acknowledged over the half term it was time to try another method.  So I am showing the lovely thing to guests now which is great as i would never have opened the door to guest before. Remember I run a B&B Ferndell in Shrewsbury click here to have a quick look at my lovely video  just to prove their is no clutter on display. Yesterday I went up town and gave out flyers Id made with details of the item to various shops to put in their windows, so keep your fingers crossed by the next post hopefully it just might be sold..(if only a rich business man would buy it and donate it to the local children’s hospice – that would be perfect.)

I met a lady at a charity do last night and she had spent the day washing her daughters cuddly toys, Barbies and tiny Barbie outfits, she had this worried feeling in the morning the items might be getting destroyed by mice as they were stored in an attic in a barn, it made us all laugh as her daughter is 26…I can safely say I will not have that worry when my children have grown up as Ive not kept anything apart from Charlie’s trains and track..any way sorry i just wanted to share that with you -back to my update….

In amongst all the clutter that was lurking behind that door was a table tennis table, folded up unable to be used obviously, as it looked like one of those rooms you see on TV about hoarders. Admittedly the clutter has now been sorted, the room is so nearly finished but still the bloody Thomas The Tank Engine Bed is sitting slap bang in the middle and nearly 11 months on, still my table tennis table is folded up…Once that table is unfolded and there are no boxes or stuff to break you neck on while trying to play, I will really feel I have that usable room I’ve been after.. “my doing room”-somewhere to dry the washing slash games room slash office space, and maybe by then I will have bought and hung the lampshades.

My husband has had a bit of a decluttering spree over the last 2 weeks… selling, clearing & tidying stuff in one of his outside storage rooms…I read in one of my decluttering books it would have a knock on effect with other family members and it looks like they are right. 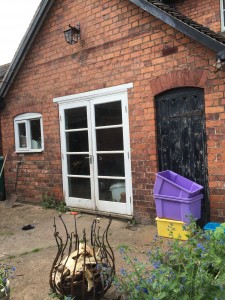 For the room behind the kitchen we bought  bi-fold doors 2 weeks ago off Ebay to replace the door and window, we are waiting to buy a lintel or metal beam and then will take the ceiling down and open up the room by removing the wall to the outside toilet..now that will create a right mess, I would secretly love to be getting on with that now but my husband has a bad lower back bless him so I must be patient, but we will be one step closer to having that too as a usable room, rather than just a room you walked through that was absolutely rammed with all the things that were lurking behind that door  just to get to the garden which by the way in some areas is like steptoes yard.

With just over one month to go till this decluttering blog ends, I’m already contemplating writing another one year blog on developing steptoes yard into a beautiful garden, but lets just concentrate on getting to the end of this one first, which reminds me I said I would put up the before photos ..I will do that on the very last post..OMG how embarrassing is that going to be…