When I first started this blog some people told me it had inspired them to make a start on their own decluttering, so last night when one of my daughters friends said her mum was going to start decluttering her house due to a house move I told her to tell her mum about this blog and showed her the book that’s really helping me – “Banish Clutter Forever” I also offered my help if she wanted it. 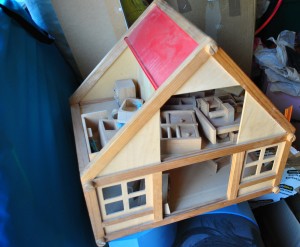 Not that I’m a good advert, as something I simply cant Banish which my girls haven’t played with for years and is collecting dust & surrounded by clutter in the room behind the kitchen is their little wooden dolls house.

So when last weekend I had a lovely Chinese family return to stay with a little girl of 6ys (remember I run a B&B)  I knew just the thing to entertain her. It was such a treat to see it being played with again, she had taken a shine to my Mae (14) who was only too happy to play with her. ..Ooh could do with a pre school little boy to stay and then I could route out my Charlies trains..they are somewhere in here. 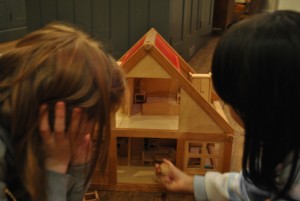 So last night was bonfire night and my eldest daughter (18) had a few friends round, I had lit the fire basket for them which was in the back garden. Now, for them to get to it they had to go through the room behind the kitchen, so I quickly looked amongst the clutter for my 4 curtains that I could chuck over the mess. They were a great way at making the room lurking behind that door not look in such a tip, but then I remembered they went to the charity shop on one of my first sorting sessions doing this blog…”buggar”.  I’m not joking when I say the room could easily have starred in the TV programme “The Hoarder Next Door” (and I have the photographs to prove it)  but then that’s why I’m doing this blog to clear this room too. So there was no hiding any of the stuff it just had to sit there bare and exposed, but then they are just teenagers walking through a room to get outside to light fireworks..they wouldn’t have noticed..would they?