Ok back on track..I think my previous post I waffled on too much  so here we go..

Amongst all the clutter that’s lurking behind that door is  “The Ugly Ornament”, now months and months ago when yet again I was going through stuff to do a car boot which we did actually do this time, over on the west mid show ground, my husband picked up the ornament and said “what about him?”..now I’m pretty sure if you saw him you would think yep!! stick him on the car boot pile and to be honest if he was yours I would say car boot without a doubt.. . BUT I felt the wind knocked out of my sails, I needed to catch my breath, the sheer thought of him not being around really panicked me and I started to cry..you see I don’t particularly want him, I certainly don’t want him on display in my lounge or kitchen BUT I don’t want anybody else to have him either..He was my lovely lovely mums, he sat on her sideboard as I was growing up I remember being at a big outdoor market when I was little, where a man had the side of his big lorry open and all this household stuff being auctioned off  “who’ll give me £?” what ever the figure was then and my mum bought him and on the sideboard he sat.

So I’ve come to the conclusion now is not the time to part with him so he will sit in the room behind the kitchen with all the other stuff waiting to be decluttered that’s boxed and piled up behind the poor dogs bed, until maybe when the room lurking behind that door  is redecorated.  Perhaps he will have a little shelf up high …really high… and he can look down and keep an eye on us all or maybe by then I will be ready to part with him ..who knows..time will tell 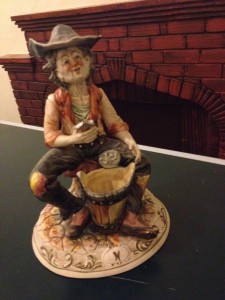