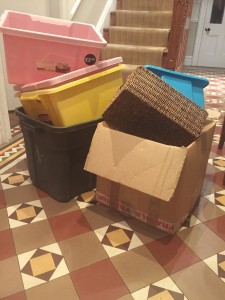 With no guest in the B&B this weekend I was able to start emptying a few more boxes from the room behind the kitchen with the intention of finding something in-particular.

You know when you just know that mixed/hidden in all that clutter, is the thing you are looking for, so you start moving stuff on top of other stuff ,carefully at first, then with gay abandon flinging things and lifting things and the order you started looking in gets confused and as you cant remember where you have already looked, you look again and oh ye you’ve seen that already but its not what your looking for and promise yourself if you come across a packet of photos you wont open it and look in places you’ve already looked..well that..is what I was not going to do this time as I’ve done that too many time when all the clutter was lurking behind that door

So as I had previously stored all the clutter into boxes in the room behind the kitchen and stored them neatly in piles and rows I started the task of going through one box at a time emptying it and going onto the next …until……I Found Them!!!-17 music practice books for the flute, wrapped up in a bright orange bag, abandoned 2 & 1/2 years ago after my daughter took her grade 4 exam. Her flute box has been closed ever since…but last week at bed time, she mentioned shes been thinking about playing her flute again..so after finding the flute (yes hidden in all the clutter)  I placed it on her bed a day later..no words spoken, and tonight I will place the books there too..again no words as I’m trying hard not to be that pushy mother that maybe I was when she was 12 bless her. 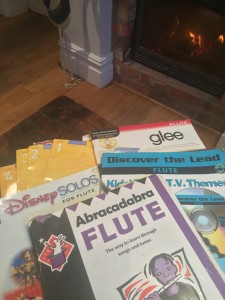 Can you tell Im trying not to get too excitied as I was looking forward to the Albert Hall in the future ever since she played away in a manger at my friends house when she was 8.,,,Calm Sarah Calm